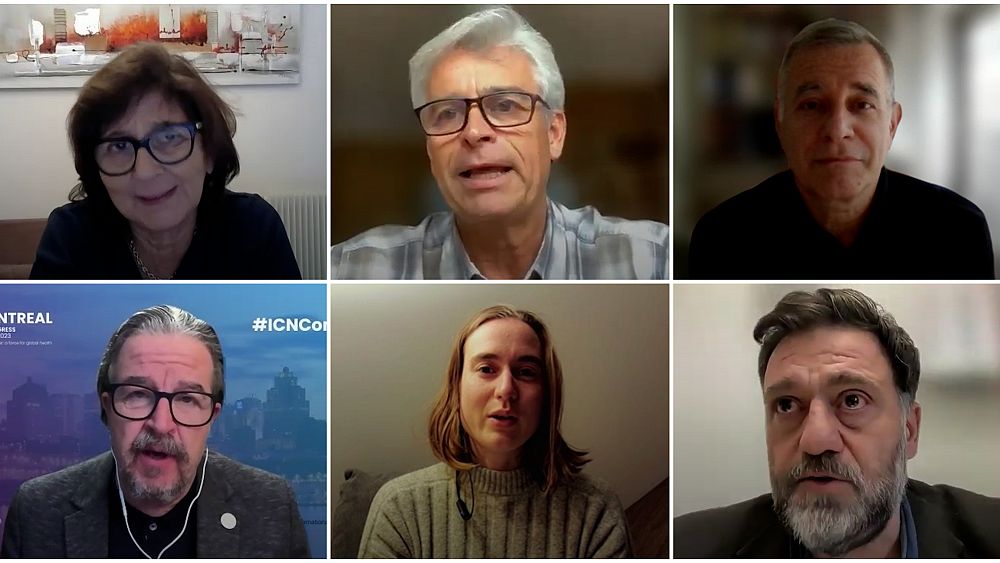 There was no shortage of public appreciation for hospital workers during the pandemic, across the world people stood on their doorsteps and balconies in the evening to cheer on the heroes holding the healthcare system together.

While this gratitude was appreciated at the time, healthcare workers in several European countries now feel like it was an empty gesture, as two years on from the beginning of the pandemic, working conditions have only deteriorated.

“That applause rings very hollow now because it hasn’t been followed by action,” said Howard Catton, CEO of the International Council of Nurses (ICN).

European healthcare professionals told Euronews that doctors and nurses are still suffering after the chaos of working through the COVID-19 pandemic.

Christophe Prudhomme, an emergency doctor in Paris, said that the “total disorganisation of the health system” put “a very strong pressure on staff”, with doctors and nurses having to wrap themselves in bin bags instead of being provided with the correct equipment.

This logistical pressure led to doctors and nurses having to make difficult ethical decisions, which took a toll on workers’ mental health — the impact of which still remains.

The president of the Italian National Nursing Association, Walter De Caro, told Euronews: “There was a kind of selection of people who could survive because there was a lack of ventilators, a whole series of resources were missing.

“This, of course, led to the emotional exhaustion of many colleagues.”

He added that the mental health of staff took a significant hit, with seven nurses committing suicide during the pandemic.

“There is no doubt that some health workers died from contracting the coronavirus,” said Catton, explaining that it was an international phenomenon.

“But we also saw this enormous psychological and mental health pressure, people ranging from anxiety and burnout to people suffering from PTSD symptoms.”

However, there has been no let-up for healthcare workers across Europe — representatives from Italy, France, Spain and Germany all described how growing workloads combined with a shortage of hospital beds are creating an unbearable working environment.

De Caro described the distressing situation in Italy: “There are no beds to admit patients and in recent days there have been numerous cases of violence against nurses.”

This is also a problem for French hospitals, according to Prudhomme.

Prudhomme added that there has been “a phenomenon of mass staff resignations” in France, as a result of these conditions.

In Germany, healthcare professionals have also been quitting, which has only increased the workload for those left behind.

Nurse Lina Gürtler told Euronews that “we still have the usual diseases”, so while staff numbers are decreasing, patient numbers remain the same.

Pay is also a key issue for European doctors and nurses, which is adding to the malaise spreading across the continent.

De Caro told Euronews that the Italian healthcare system needs a further 70,000 nurses, but despite this, the incentives to join the profession are lacking.

“The employment contract was recently renewed, but the salary of Italian nurses is still among the lowest in Europe.”

‘Politicians are resistant to investing in health workers’

Representing 28 million nurses in 130 national nurse associations worldwide, the International Council of Nurses has been taking the temperature on conditions in hospitals across the globe.

Catton warns that this stance could “backfire” as the pressure becomes too much for some healthcare workers who are choosing to leave the profession.

In the UK, where nursing staff at a majority of NHS employers have voted to strike for the first time ever, the government has refused to negotiate on pay.

While in Spain’s capital, doctors have already taken to the picket lines in November and thousands gathered to protest their “excessive workload”, “endless schedules” and “insufficient time spent with their patients”.

This was provoked by the regional government’s decision to reopen all emergency services for 24 hours non-stop, which Spanish union Amyts said has increased workloads dramatically and caused mass resignations.

Emergency nurse, Alfredo Rizo, was affected by the reorganisation of hospitals in Madrid and said that the situation is “very very stressful”.

As winter approaches, a high-pressure period at the best of times for hospitals, several European countries are now facing an unprecedented “triple epidemic”: with seasonal flu, bronchiolitis and COVID-19 circulating in the population.

The combination of pandemic exhaustion, the rising cost of living and difficult working conditions is pushing healthcare workers to the edge, many of whom feel undervalued and underpaid.