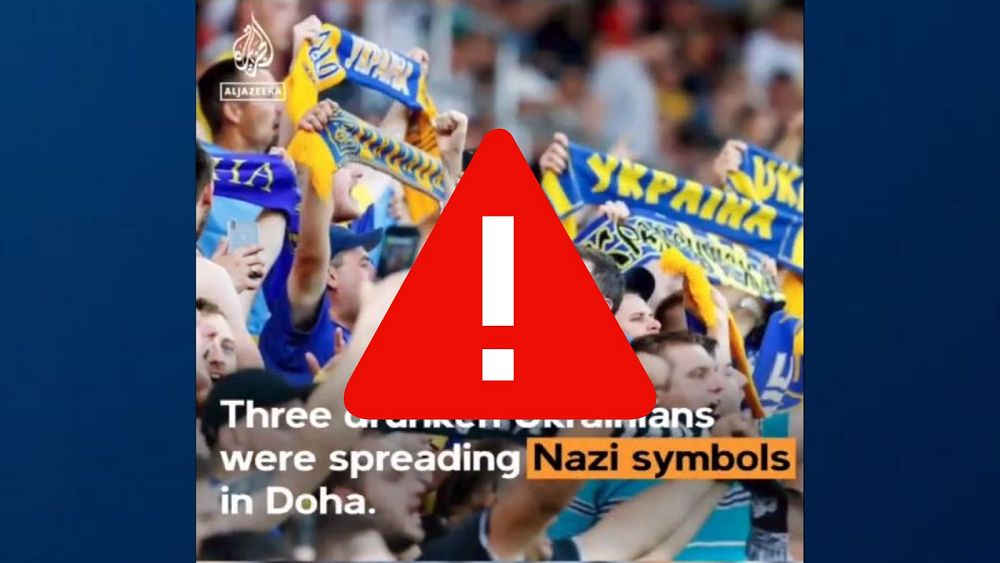 A fake video with false Al Jazeera branding has claimed that Ukrainians were arrested in Qatar during the World Cup for performing Nazi salutes.

The video includes the official graphics of the Doha-based news organisation, but there is no trace of Al Jazeera producing or publishing the story.

No such arrests of “Ukrainian supporters” have been reported.

The video was widely shared on pro-Russian Telegram channels and on the Chinese social media platform Weibo. Russia’s embassy in the United Kingdom and pro-Kremlin television presenter Vladimir Solovyov have also claimed that Ukrainian “neo-Nazis” were detained in Qatar.

But an analysis of the video shows that the report uses outdated photos — taken months before the World Cup — and some manipulated images.

Al Jazeera has also released a statement confirming that the video is “completely fake”.

“A video on social media attributed to Al Jazeera has been circulating, referring to the arrest of Ukrainian fans during the FIFA World Cup,” the organisation said on Twitter.

“The video in question is completely fake and Al Jazeera has never published any news related to this story.”

Social media users have also shared a misleading image that claims to show a fabricated article about the false “incident in Doha”.

The misleading image claims to show the cover of the French satirical magazine Charlie Hebdo, featuring a cartoon of Ukrainian football supporters defacing a World Cup poster in Qatar with Nazi symbols.

However, no such edition of the magazine can be found in their archives.

No such issue or cartoon was published by Charlie Hebdo in November 2022.

Both the viral clip and alleged magazine cover seem to be examples of “imposter content” that impersonate a legitimate news organisation to spread false claims.

Another fake video recently circulating online claimed to show a Euronews report about a Russian art auction amid the Ukraine war. The video has not been produced or published by Euronews and no such auction is due to take place.