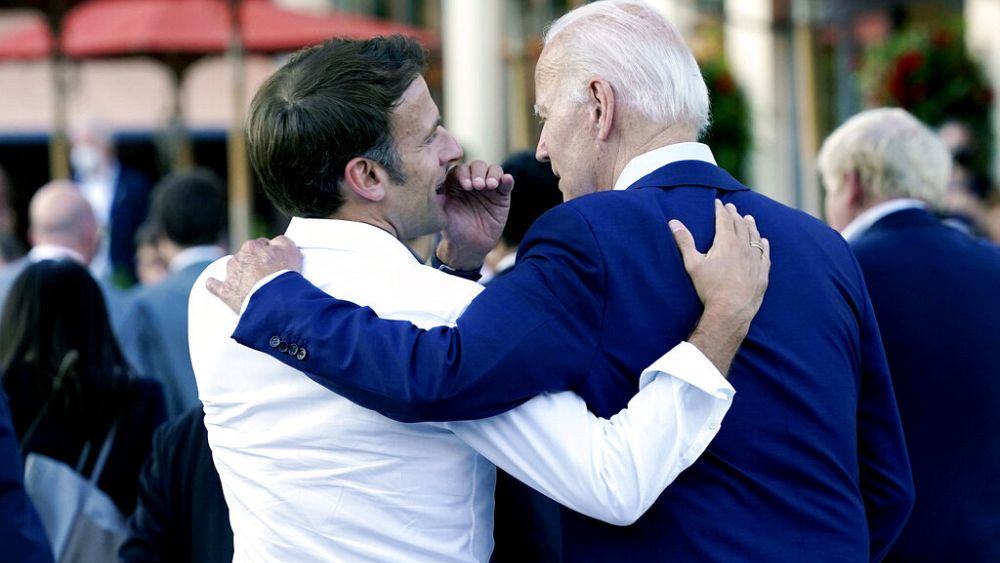 Roll out the red carpet, Emmanuel Macron has arrived in the United States.

The three-day trip is a feather in the cap of France’s president, who becomes the first European leader his US counterpart Joe Biden has invited for a state visit.

It comes amid a turbulent time in world politics, so what will be on the agenda when Macron and Biden sit down to talk?

Things between Macron and Biden got off to a bumpy start.

In September 2021, Washington announced the AUKUS alliance with Australia and the United Kingdom, depriving Paris of a mega, multi-billion euro contract to supply Canberra with submarines.

But Ukraine changed all this.

Russia’s invasion of its eastern neighbour turned the relationship around, with Macron emerging as one of the US’s principal European allies.

“Like many things in international affairs and politics, there was a watershed moment,” Dr Downing a fellow at the LSE’s European Insitute, specialising in French politics and security, told Euronews.

Both leaders will discuss financial and military support for Kyiv, but a key issue will be how the conflict ends.

While Biden faces growing resistance from Republicans about the “blank cheque” given to Ukraine, Europe’s mettle is being tested by energy price rises and a cost of living crisis.

However, according to Dr Downing, the French premier is “not feeling the pressure quite as acutely as other European leaders since he can’t run for president again”.

“Macron doesn’t face the same incentive to help end the war and get inflation down.”

In the early days of the war, the 25th French president positioned himself as a mediator, reaching out to Putin and calling for peace talks. Biden has steered clear of endorsing such calls by his French counterpart, maintaining the decision is firmly in Ukrainian hands.

How discussions ultimately play out depends on the US position, said Jolyon Howorth, a professor of European politics and transatlantic relations.

“There are many in the United States, particularly a realist camp, who believe that Biden intends to wage this war to a successful victorious conclusion for Ukraine, which will remove Russia from the list of great powers. In other words, a fairly brutal and all-encompassing strategic objective,” he said.

While recognising this may not play out, Prof Howorth said such a position is far less widespread in Europe, potentially creating a bone of contention between France and the US.

Whatever the case, an Elysée source described the pair’s relationship as “very friendly and very trusting”, saying it was “very open on all important subjects, in particular with regard to the Ukraine crisis”.

Soaring energy prices are one of the most conspicuous consequences of the Ukraine war.

Though reverberating around the world, this impact has been felt particularly in Europe, which was massively dependent on Russian energy before the war.

Thanks in part to the controversial fracking of shale gas, the US has emerged as an energy superpower, exporting Liquified Natural Gas (LNG) around the globe.

“France is going to need at least some of that LNG to replace Russian gas that has been cut off,” said Dr Downing, though he recognised that alternate suppliers were available in Algeria and the Persian Gulf.

Russia’s decision to halt gas supplies to Europe through the Nord Stream pipeline in September sent shockwaves through the region, causing oil and gas prices to surge. Though this has had a bruising effect on its economy, France is less exposed to energy price volatility due to its large amount of nuclear power.

Prof Howorth elaborated on exactly what the US and France would discuss around energy.

“Talks will revolve around not so much as whether the US is prepared to supply — because I am sure they are — the question will be about price,” he told Euronews.

Importing LNG to Europe from the US is much more expensive compared to conventional gas supplies. It is more costly to produce, store and transport across the Atlantic Ocean, plus generates a larger carbon footprint.

“The Americans are doing much better economically and geo-strategically out of the war than the Europeans,” said Prof Howorth. “The message Macron will primarily put across is that it is in America’s interest to help the Europeans, rather than hinder.”

Looming in the background of the talks is a potential US-EU trade war. Tensions between the two have mounted in recent weeks over Washington’s contentious Inflation Reduction Act.

The US wants to give its green businesses €356 billion in tax breaks and subsidies in a bid to shield the country against energy price inflation and curb fossil fuel use.

But EU officials claim this industrial policy is protectionist, discriminatory and will deprive the bloc of valuable investment.

“This is a big one, which they’ll have to sort out,” said Prof Howorth. Yet, he was sceptical about the chance of this contention derailing talks as they are simply “too important”.

“Ukraine is the most urgent problem”, he added. “[They] have to reach an agreement on the next steps”.

Such common grounds for diplomacy were echoed by the Elysée source.

“We believe we have a common interest today in investing and innovating together, particularly in the context of our systemic competition with China,” they said.

China’s growing assertiveness in the Indo-Pacific region will almost certainly be discussed.

“I have no doubt that China will be on the agenda,” said the Elysée source. However, they struck a slightly defiant tone, trying to decouple France and the US.

“Europe knows how to assert its sovereignty and deploy its own instruments when it comes to the relationship with China. We basically want China to deal with the EU … collectively and avoid playing segmentation or division as we have seen in the past.”

Dr Downing claims France is Europe’s “most Sinophile” country: it is much more reliant on Beijing than the US for trade and investment.

Macron has repeatedly tried to persuade Washington to allow Beijing to be an intermediatory in the Ukraine war — something which is said to have irritated Biden.

Under his administration, the US has taken a hawkish stance on China. In October, Biden unveiled a sweeping set of export controls that ban Chinese companies from buying advanced chips and chip-making equipment, hampering Beijing’s ambitions to be a tech superpower.

What this means is that there could be disagreement over the way to handle China during the upcoming visit.

“Biden is putting enormous pressure on NATO to step up its anti-China rhetoric and label it a systemic threat, but I think Macron will resist that call quite strongly and try to argue that we as the West need to establish some sort of working relationship with China, particularly to avoid a China-Russia axis,” Prof Howorth told Euronews.

“It is not clear whether Biden will back down on that because he appears to be on a crusade,” he added.

Another possible topic is the environment, with the pair exploring common ground on curbing emissions and green energy.

“As we see on the major climate issues, biodiversity, innovation and technologies; there is a need to resynchronise the American and European agendas,” said the Elysée source.

Yet there was scepticism about Macron’s green credentials, besides the pair’s willingness to engage in discussions around the environment.

“I am a bit cynical about Macron’s egology”, said Dr Downing. “He had a Paul on the road to Damascus moment where he became a massive environmentalist overnight. But I am not convinced”.

Prof Howorth was also doubtful the climate would be high on the agenda.

“At the end of the day, the environmental situation is probably the biggest existential threat to the whole planet — much more than antagonisms between the US and China — but it is not something Biden and Macron can do anything about bilaterally.”

“The whole process is, by definition, multinational and multi-lateral.”