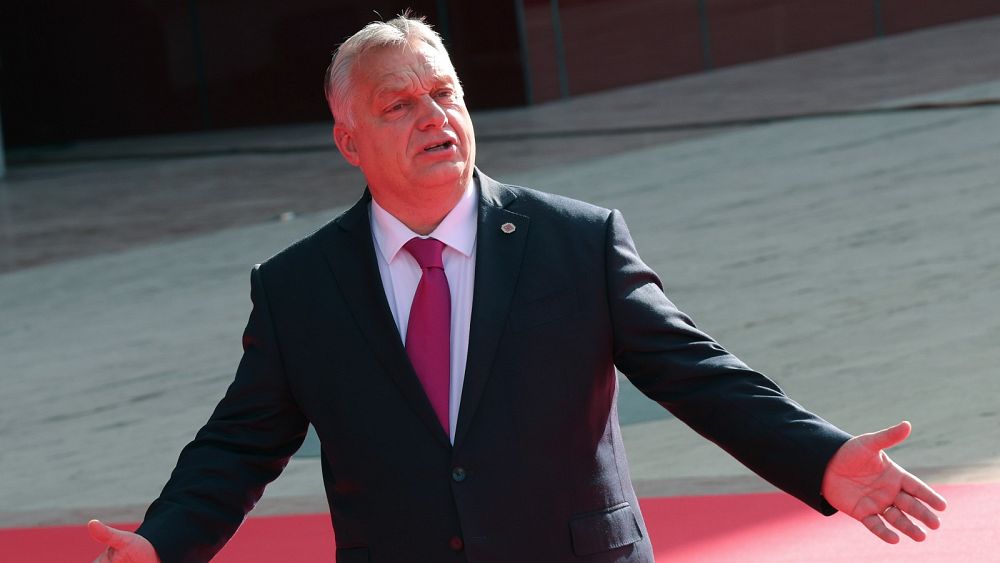 Hungary has blocked the approval of a new EU package of financial aid for Ukraine worth €18 billion, which the Kyiv authorities urgently need to cover their ballooning state deficit and keep the economy running against the backdrop of Russia’s invasion.

The aid is designed to be disbursed over the course of 2023, amounting to €1.5 billion per month.

“Hungary is not in favour of the amendment of the financial regulation,” Hungarian Finance Minister Mihály Varga said during a meeting of finance ministers on Tuesday.

The Hungarian veto triggered a domino effect and prompted ministers to delay other three key votes, including one on an internationally-backed deal to reform corporate taxation.

“Ukraine is a country at war, it desperately needs our support and we just cannot allow one member state to delay and derail this EU financial support,” said European Commission Vice-President Valdis Dombrovskis.

“We must deliver it, one way or another, and we will do it.”

Hungary is on the verge of having €7.5 billion of its allocated share of the EU budget frozen after failing to complete a series of reforms that are meant to address, among other issues, corruption, irregularities in public procurement and conflicts of interest from government officials.

The unprecedented freezing of EU funds was recommended last week by the European Commission under a novel conditionality mechanism, designed to safeguard the bloc’s financial interests.

The European Commission’s recommendation was then passed on to finance ministers, who have the final say. But the decision added on top of a long to-do list, leading to several files becoming politically interlinked.

The tax deal has been under discussion since mid-2021 as it needs to be transposed into EU law in order to become effective. Hungary was the only country that opposed the deal when it was put to a vote in June, arguing the reform would hurt European competitiveness and endanger jobs.

More recently, Hungary voiced its displeasure regarding the €18-billion package of financial aid for Ukraine, which would be bankrolled through the issuance of new common EU debt.

Brussels is keen to approve the 2023 envelope as soon as possible after a much-publicised failure to release the entire €9 billion that was promised to Kyiv earlier this year.

As these two files – the tax deal and the financial aid – require unanimity to be passed, Hungary has been able to leverage its veto power to exert pressure on the two other decisions concerning its public coffers – the €7.5 billion in cohesion funds and the €5.8 billion in recovery grants – which only need a qualified majority.

Crucially, the recovery plan has to be approved before the end of the year, otherwise, Hungary would lose 70% of the pre-allocated cash.

In the end, the four votes became interlinked, despite their distinct nature.

“I would like to point out that I see all these topics as one package,” Czech Finance Minister Zbyněk Stanjura said on Tuesday morning, before heading to the ministerial meeting.

The Czech Republic currently holds the rotating presidency of the EU Council and is tasked with setting the agenda and steering the political debate.

The question of whether ministers would take a vote on the four issues had been the centre of speculation in Brussels for the last few days, with diplomats saying that it would all depend on the mood inside the room.

After an exchange of views over breakfast on Tuesday morning, during which Hungary’s opposition became clear, ministers decided to postpone the key votes.

The delay in the aid for Ukraine is particularly worrisome for the EU, as the war-torn country has been plunged into darkness following a brutal barrage of Russian attacks.

Stanjura and Dombrovskis even suggested the financial package could be released through enhanced cooperation, a system that creates a separate avenue with a reduced group of member states.

“We will not be discouraged. Our ambition remains that we will start the disbursement of our aid to Ukraine in early January,” Stanjura said, asking the Council’s team to examine “alternative” solutions that can bypass the unanimity requirement.

“We will be looking for a solution supported by 26 member states.”

Reacting to the news, Hungary’s Prime Minister Viktor Orbán said there was “no veto, no blackmailing” and that his country was open to providing financial aid to Ukraine “on a bilateral basis.”

“Common EU debt is not the solution. If we continue to go down the road towards a debt community, we will not be able to turn back,” Orbán said on his Twitter account.

“We envision a different future for Europe. One built on strong member states, instead of huge piles of common debt.”

It is unclear when the four files could be voted on, as no further meetings of EU finance ministers are scheduled to take place before the end of the year.

The Czech Republic, however, could convene an emergency meeting to move forward with the stalled files.

In the meantime, ministers tasked the European Commission with submitting a new assessment of Hungary’s cohesion funds to take into account the reforms that Budapest has carried out so far. The new analysis could downgrade the €7.5 billion penalty.

This article has been updated to include new reactions and developments.